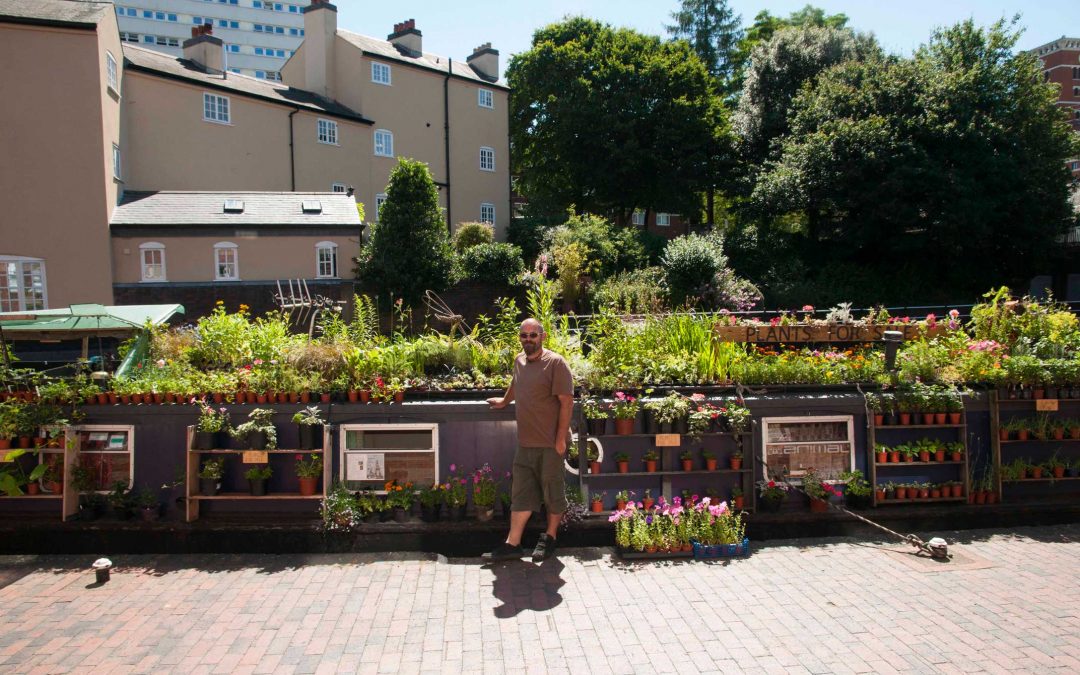 While bugs, blizzards and blight are familiar challenges facing many allotment plots, gardener Stuart Megson has the added anxiety that at any moment his allotment (and his home) could be submerged in 4ft of water. 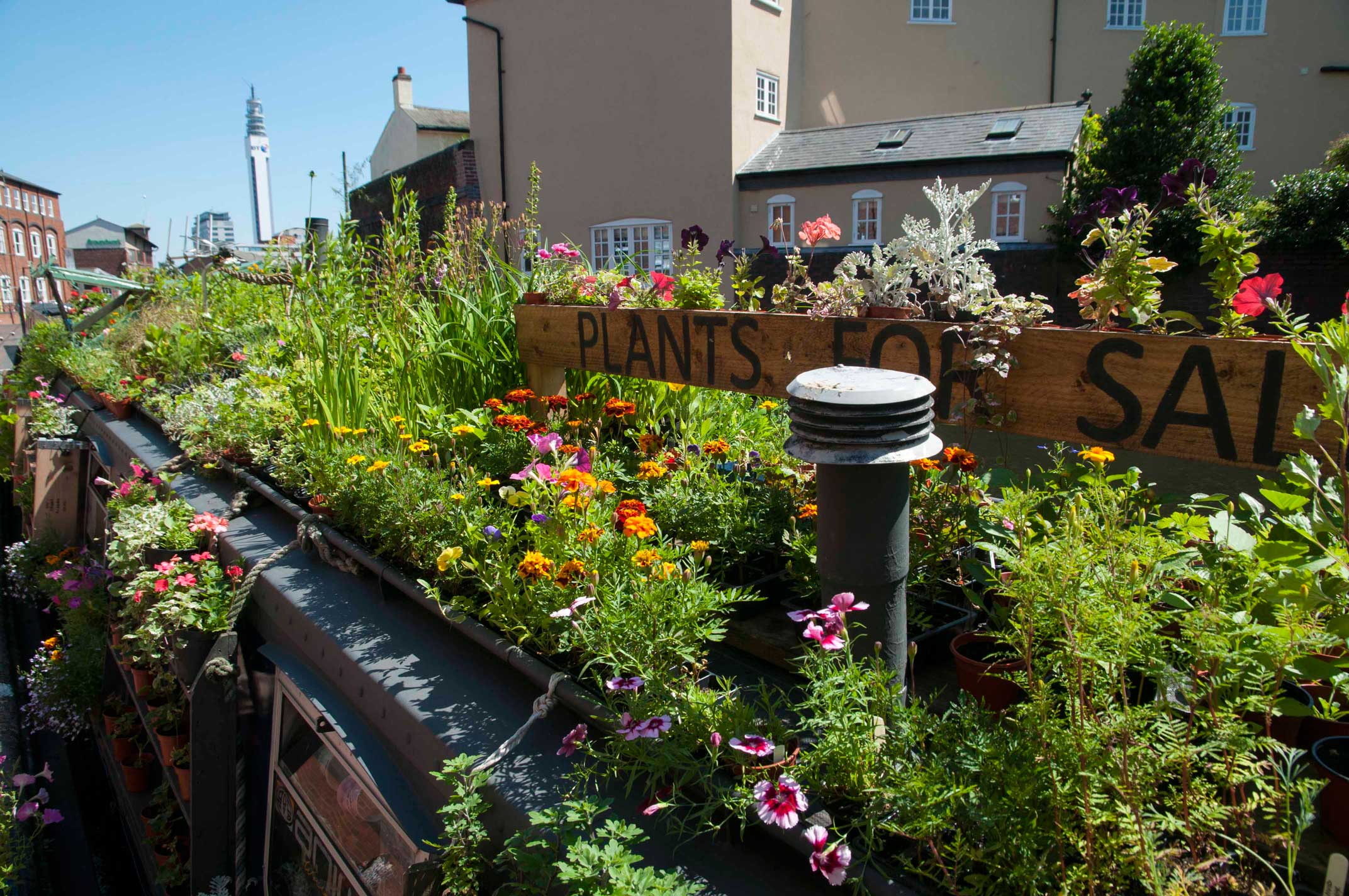 “It all started with a couple of houseplants,” says Stuart, a gardener by trade. “But one day I looked at the roof of the boat and thought if I moved all the clutter out of the way, it would be a perfect place to grow plants!

“They’re all held in by the handrail and we’ve never had any fly off into the canal yet, but there’s always a worry that we might capsize with the weight of all those pots!”

Indeed, as well as sharing the boat with girlfriend Lindsay Andrews and their two dogs Honey and Smokey, NB Sparks is now home to more than 1,500 vegetables, fruits, herbs and flowers, which overflow into the cockpit, the bow and along the top of the cabin. What started as a hobby has grown into a mobile nursery. 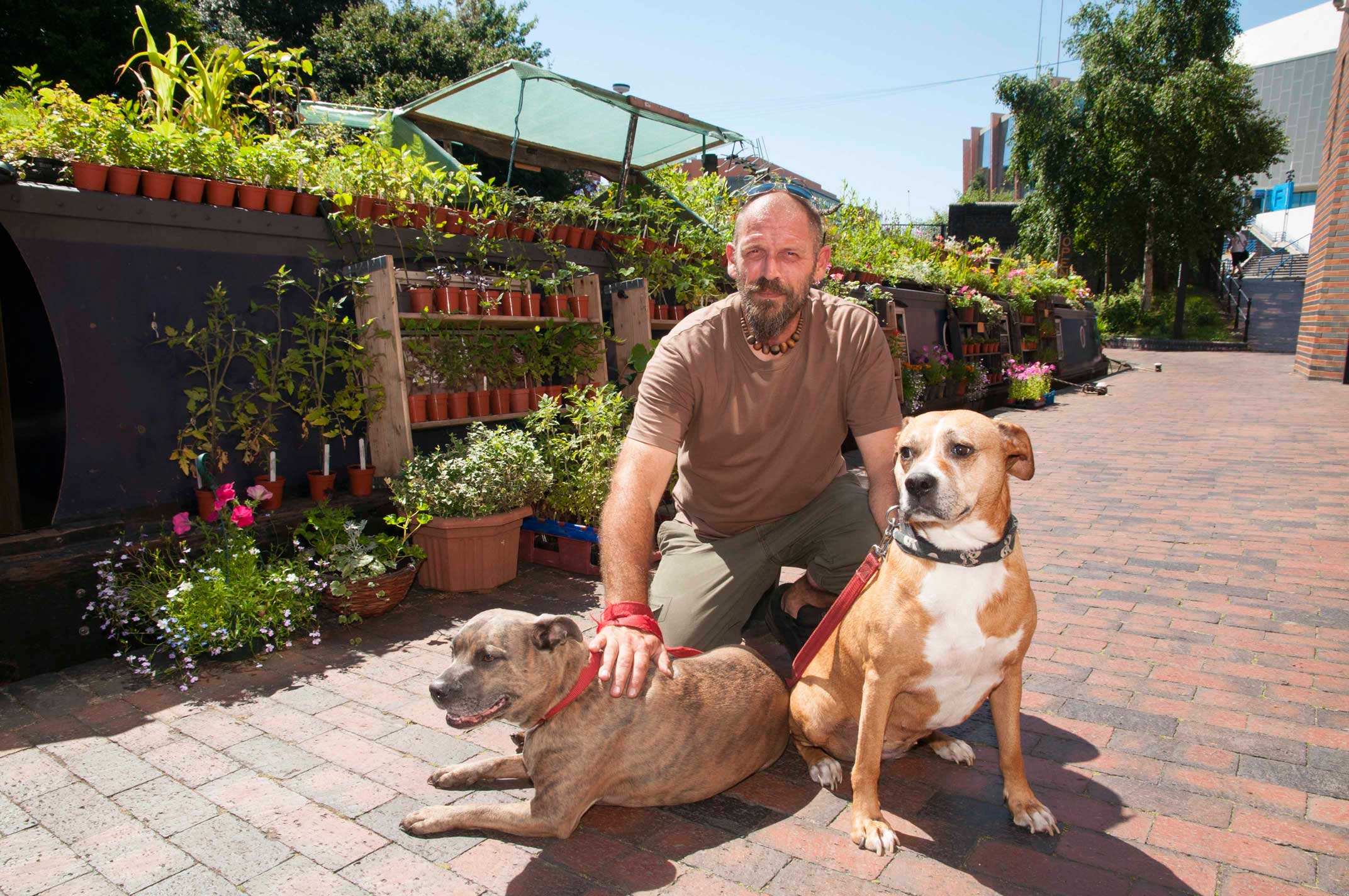 Selling plants and seedlings to towpath walkers and other boaters for the last four years is unique enough, but what sets Stuart’s waterways wilderness apart is that every plant is sown from seed on the boat.

In the spring, there’s no chance for a long, hot soak in the family bathtub, for here sowings of vegetables such as courgette ‘All Green Bush’, cucumber ‘Marketmore’, squashes, sweetcorn ‘Sparrow F1’ and ‘Minipop’, and even melon, are all started off under the bathroom cabin window.

Later, young seedlings are moved to the roof top coldframe – created from the apex of an old greenhouse – which protects the plants from frost thanks to the mushroom vents in the roof of the boat. 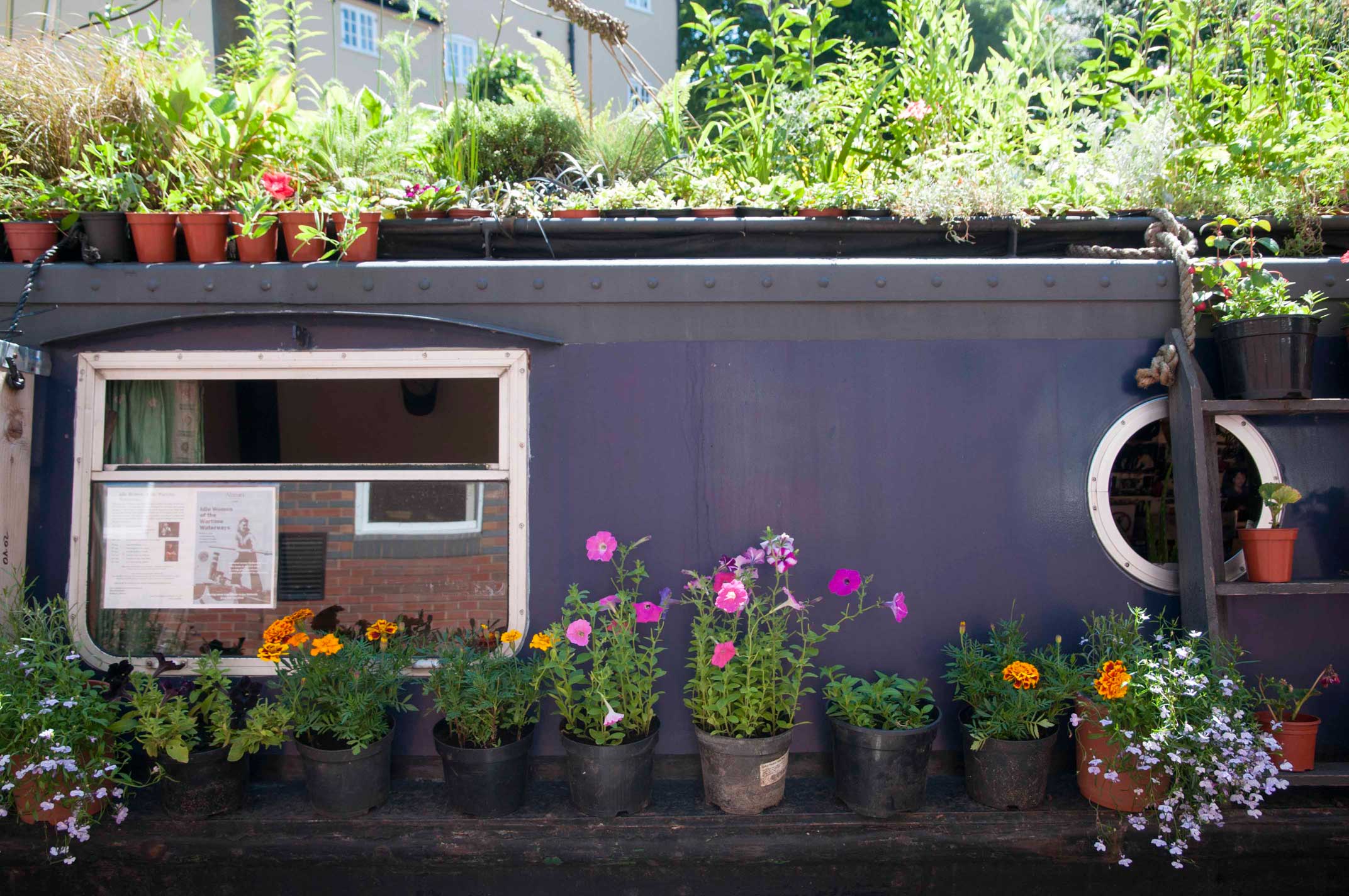 “We’re able to feed the greenhouse with warm air at no extra cost to us,” says Stuart. “And this enables us to sow things that require a bit of heat such as chillies and tomatoes.”

In fact, so efficient is Stuart’s makeshift greenhouse that he’s been able to overwinter fuscias, geraniums and petunia from one season to the next despite being exposed to the elements all year round – and in the summer, it boasts more than six different varieties of tomatoes such as ‘Heartbreaker Vita’, ‘Roma VF’, ‘Alicante’, ‘Marmande’ and ‘Tigerella’.”

“If we know we’re going to stop somewhere for a week we’ll get the compost bag on to the towpath and have a good sowing and potting up session,” says Stuart. “And of course, we’ll keep quite a few plants back for our own uses.” 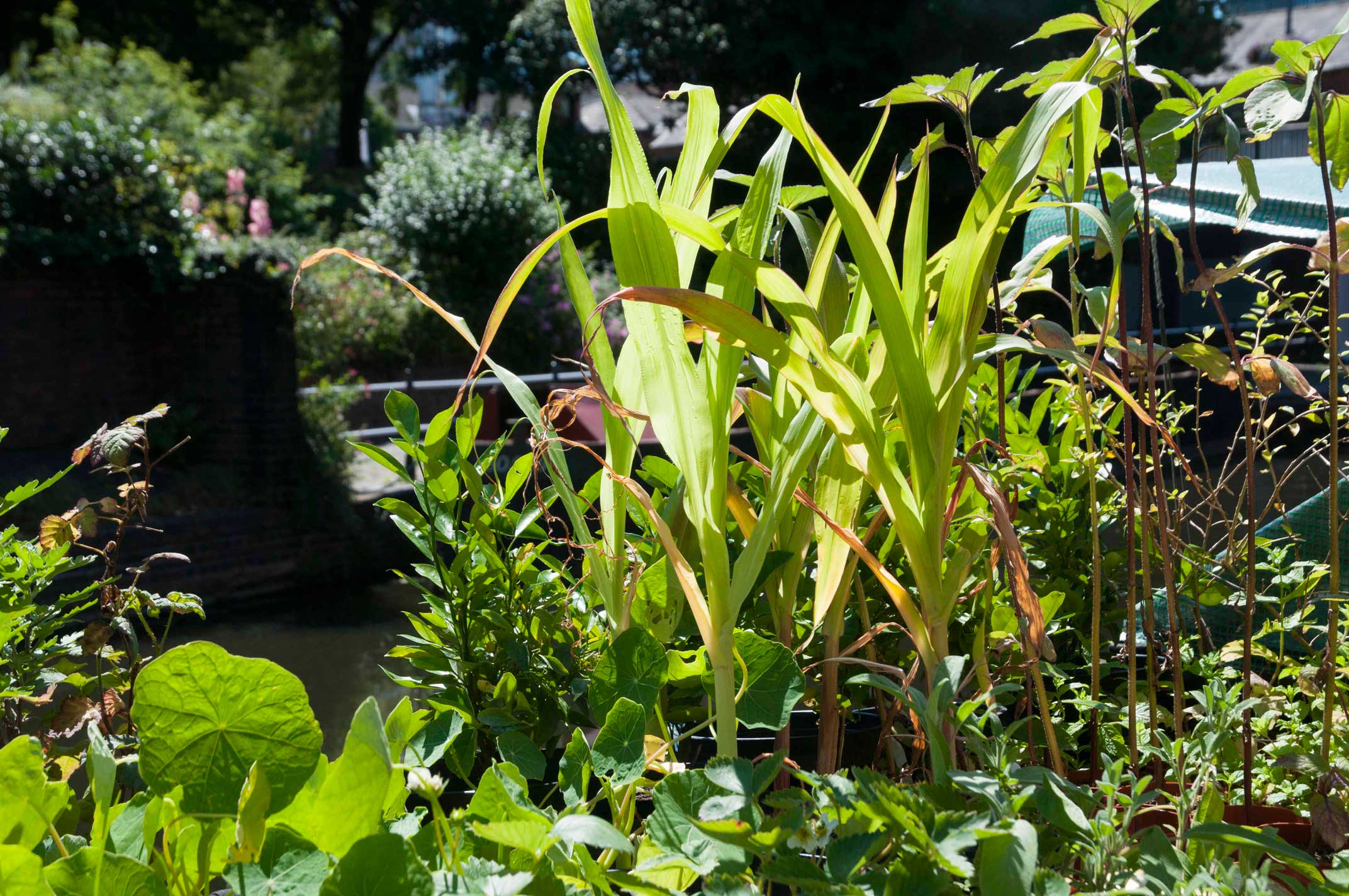 In Stuart’s personal collection are salad leaves, spring onions, and a huge array of herbs, including more unusual varieties such as bergamot, horehound, lemon verbena and anise. The purple sage and the red leaves of ‘Summer Surprise’ basil – not to mention the ivy leaf and angel eye pelargoniums and trailing petunias – look stunning, trailing down the sides of the dark blue boat or lined up on makeshift shelves.

And with the roof of the boat acting like a moveable sun terrace, fruit is in abundance too, with strawberry ‘Senga Gigana’ and creamy pineapple flavoured ‘Pineberry’ tumbling down the portholes, in between bushes of blueberry and goji berry. In fact, sometimes it can be hard for passersby to tell it’s a boat at all!

But Stuart is not the only one who has taken this nomadic style of nurturing onto to Britain’s 2,000-plus miles of navigable canals and rivers.

While historically narrow boats were used for carrying coal and grain – with the roof the only space to walk across – an increasing number of leisure boaters are utilising the space to grow their own, cultivating potatoes in raised bed planters, growing beans up trellis and herbs in Roses & Castles canal ware.

Retired couple Alison and Peter Watkins have spent the last 17 years ‘testing the waters’ when it comes to gardening on their canal boat Gwenellen, with the help (or perhaps hindrance) of their lively Jack Russell, Bruce.

One covered end to the boat is used as a greenhouse and the roof as a suntrap for courgettes, cucumbers and chilli peppers in containers, which Peter, 71, chops up and uses to flavour oil for cooking.

Fellow boater Lesley Reed, who is permanently moored at the Beckett’s Park marina in Northampton, uses her tiny boat garden as a place to relax after long shifts as a nurse.

Downsizing from half an acre to a few square feet four years ago, she still manages to pack the bow of her Dreamcatcher II canal boat with plenty of plants including clematis, sweet pea and fuscia, as well as edible flowers such as bellis daisy and nasturtium.

“I wanted to have a nice place to sit and also plenty of cut flowers,” she says. “And when gardening is in the blood, it never leaves you – even when you’re on a boat!”

“It shows how creative you can be with veg in pots,” says Paul. “Cavolo Nero kale, for example, gives a stunning architectural quality to displays alongside flowers.”

While narrow boat nurserymen have to be mindful of obscuring their sightlines, creating instability or, worse still, falling overboard in their horticultural endeavours, gardeners with small city plots or container gardens have to think just as creatively.

“Our boats get the same level of sun as a south facing garden so we have to be very careful about pots drying out, especially the small ones – and because they’re on top of a metal roof they can heat up quickly,” says Stuart. 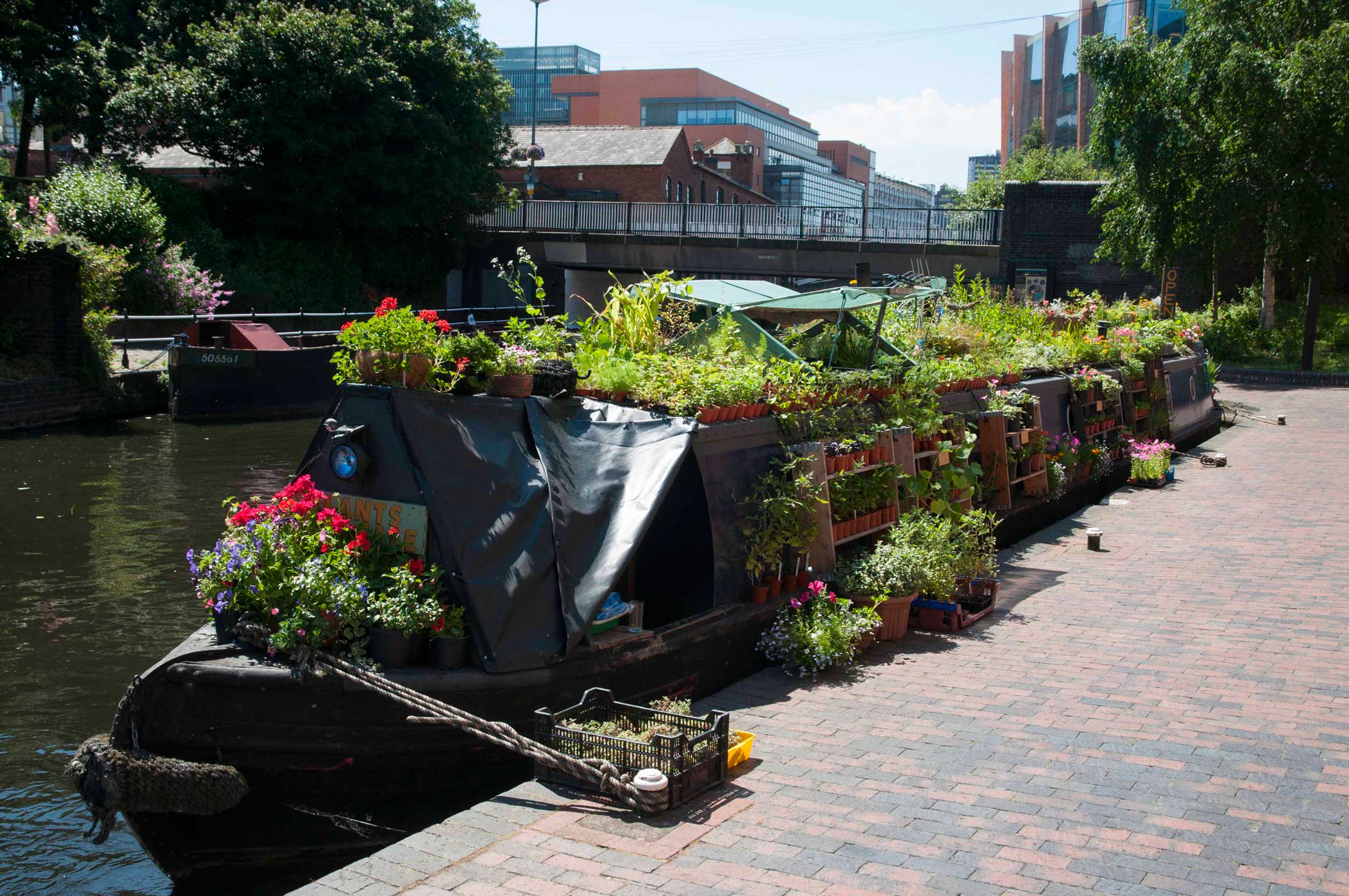 Lesley Reed recommends putting a layer of gravel in the top of the pot to keep the soil moist after watering, while other boaters use bottle irrigation by filling plastic bottles with water, replacing the lid and making tiny holes in the lid and the sides. They then place the bottle cap-up in the soil near the roots of plants so the water gradually releases.

Evaporation and run off can quickly leach nutrients out of the soil in pots too, so the Watkins refresh the compost each year and use slow release food pellets to keep their display tip-top.

Debbi Figueiredo, national boating co-ordinator with the Canal and River Trust – who lives on a boat in Berkhampsted and grows salads and vegetables in raised beds along the towpath – suggests mixing decorative companion plants with vegetables to make pretty but practical displays that deter pests.

“French marigolds, poached egg plants, red basil and nasturtiums are lovely mixed with other flowering plants,” she says. “And lettuce makes a good edible pot edger, especially if you mix up the colours and varieties.”

While life might be a little less nomadic for boaters Stuart and Lindsay these days – “we have to spend two hours getting all the plants back on board before we leave our mooring!” he says – they wouldn’t have it any other way.

“Gardening is all about having fun and whether that’s simply pruning a privet hedge or growing herbs in old leather boots, everyone has their own style,” says Stuart. “For me, there’s nothing better than kicking back and watching the world float by while I’m enjoying my garden.”

This article was originally published in Kitchen Garden magazine, October 2016.